By Julien2 May 2022Illustration, Post4 min read
No Comments

More and more clients are turning to vector illustration. What are the advantages of vector, when is it recommended, what are the softwares that allow to make this type of illustration…

Before answering and entering the heart of the matter, the first question to ask is what is vector?

The different styles of vector illustration

Just as there are different styles in traditional illustration, there are also different styles in vector illustration.
– The most common style and often the most requested is the “flat design”. What is flat design? It is simply the creation of a shape, a landscape or a character without creating any shade, shadow or gradient. The illustrations are flat colors, however, the forms can of course be worked.
– We also find the line style. As its name indicates, the illustrations will be made with a monochrome line (most often black) or by combining different colors. 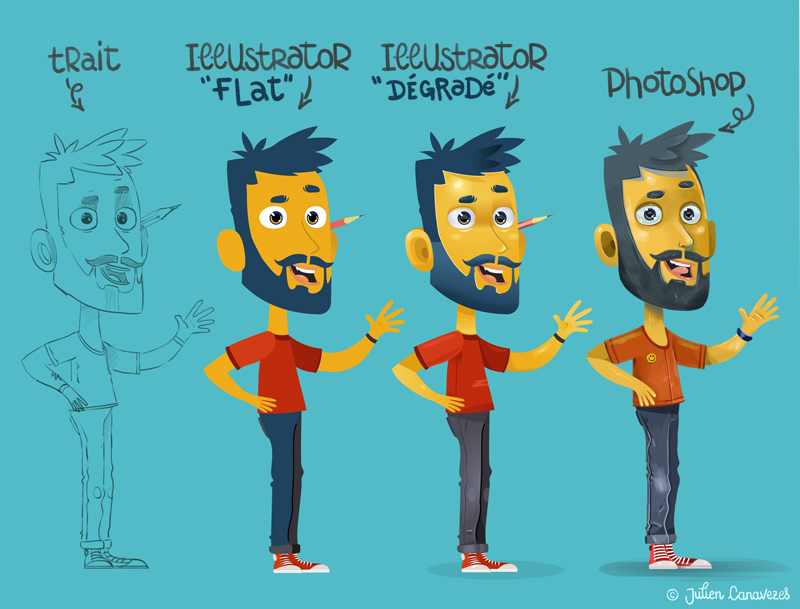 The advantages of working with a vector illustrator

The big advantage of the vector illustration is to be able to enlarge infinitely the illustration without having any loss of quality! Thus, if you want to communicate on a subway poster in 4/3, the illustration will remain perfectly clear.
The second advantage is the weight. Indeed, a vector file compared to the bitmap file has a light weight. Thus for the exchanges by email or saving on USB key, the transfer is done in a wink.

The uses of vector illustration

Today I know very few brands that do not use a vector illustrator. If only for the creation of their logo. Using vector is to free yourself from all constraints. As we saw earlier in the article, the choice of dimensions is infinite, but also the media Etc. Thus, companies that had their logo in bitmap have chosen either to vectorize it or to redraw it in vector.

You will have understood, the most frequent use of the vector remains the creation of a logo, but it is also recommended to realize its mascot in vector in order to facilitate the declensions, we can also realize typographies, illustrations, plans, pictograms etc…

What are the vector software

The best known: Adobe Illustrator, which in my opinion is the most professional, the weak point is the price and the fact that it is a subscription.

Affinity Designer is an excellent alternative, no subscription, a fixed price and that’s great!

Inkscape never tried so no opinion, but it is free!

Vectornator is also a very good software on Ipad.

What you need to know about vector graphics

– The vector file is either an AI EPS or SVG file

– On a single file there can be a set of illustrations / logo / picto etc. …

– It is quite possible to vectorize a photo, image … (beware of the loss of some details)

– If you work for the web the file will have to be in RGB on the other hand for the print it will be asked of you CMYK.

– It is complicated and sometimes impossible to recreate textures in vector, so if you want to have an illustration with a multitude of textures, vector illustration is not recommended.

For more examples of illustrations, I invite you to consult my book of vector illustrator.

If you have any comments, additions or questions feel free to leave a little message I will not hesitate to answer you 😉

Are you looking for a Freelance Freelance Graphic Designer and / or Graphic Designer? I offer you the creation of illustrations and graphics for the press, publishing, advertising and communication (creation of characters, mascots, character design). Support: web and print. I also work as a youth illustrator: press and publishing for children, educational projects ...

LOOKING FOR AN ILLUSTRATOR